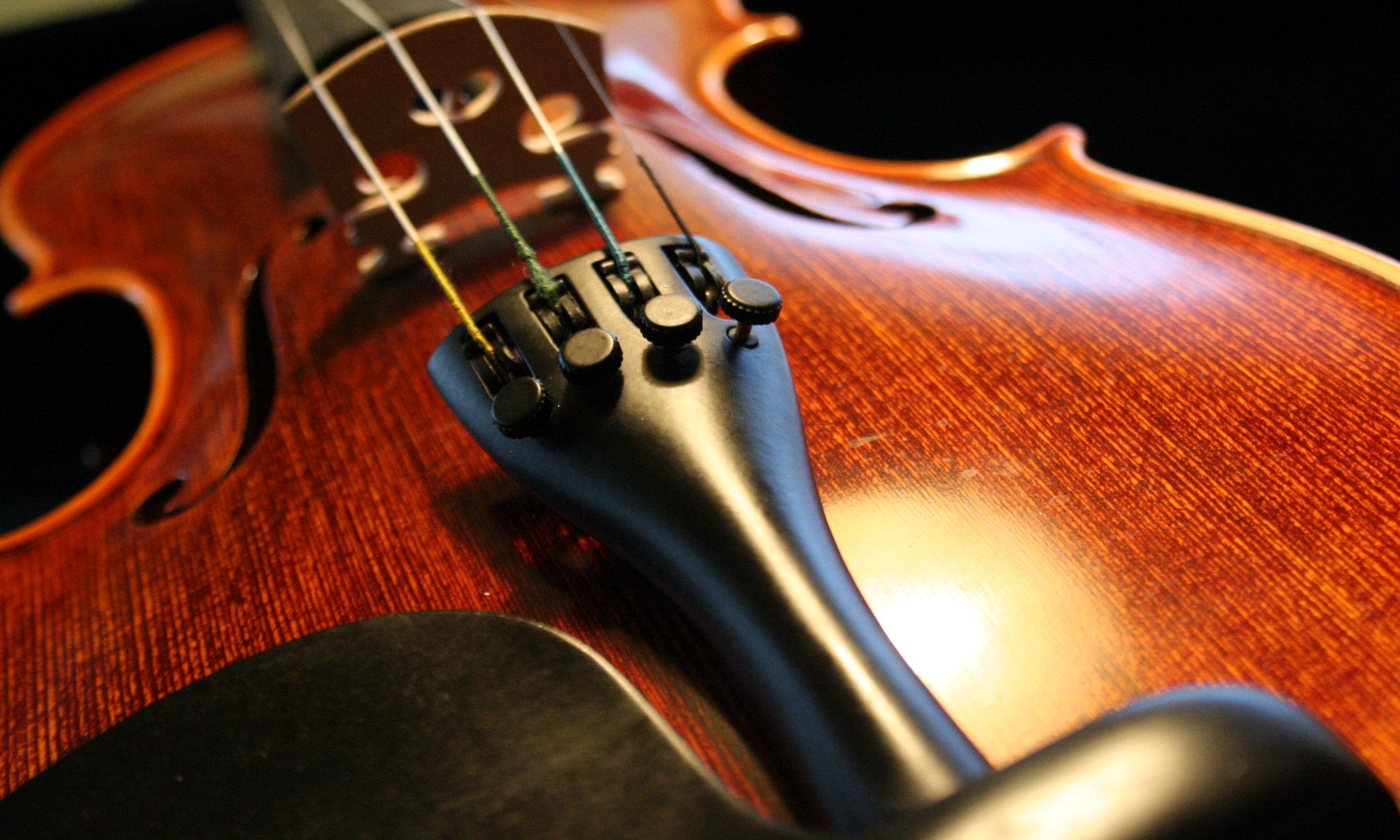 Is there any instrument that sounds more unpleasant in the hands of a beginner than the violin? Consider the piano. No matter where you hit the keys, you‘re guaranteed to be in tune, whereas if you’re off by just a millimetre on the violin, everyone will know. The guitar has frets that help delineate finger positions, while violins have nothing but a long, terrifying, featureless expanse. The cello? The strings are longer and the pitch is lower, so you have more room for error.

Unless you’re unfortunate enough to have a child learning it, it‘s rare indeed to encounter the torturous sounds of a poorly-played violin. It’s for that reason alone, I think, that parents encourage their children to take up lessons. If they knew they‘d be exposed to hundreds of hours of frustrated, repetitive scratchings before hearing a hint of the heavenly tones that they hear on the radio or Spotify, they’d have bought a piano or guitar instead.

Yes, I learned the violin. How could you tell?

I do my best work when I solve my own problems. When I was at school, I spent a year in a ‘Young Enterprise’ scheme creating CD-ROM textbooks for biology, chemistry and physics exams because I found revising unbelievably boring (the company, of which I was Managing Director, instantly began in-fighting the moment a software publisher offered to buy the CDs).

More recently, Zombies, Run! — a fitness game for smartphones that makes running fun — was partly borne out of the months of pain and tedium that accompanied my learning how to run at university.

Learning the violin? That’s a special kind of pain, and it requires a special kind of solution. But it’d be worth it, because if you can make it through hundreds and thousands of hours of hard graft, you just might have a few moments of pure grace.

As with a lot of funny-but-mildly-offensive memes, High Expectations Asian Father has a kernel of truth to it. I saw a variation: “You can learn whatever musical instrument you want: Violin or Piano.”

I don’t know where these stereotypes come from, but the best origin story I’ve heard says that immigrants have always suffered from prejudice, and the Asian response was to pursue professions in which advancement depended purely on objective criteria. Becoming a journalist or an artist requires connections and is subject to people’s opinions, whereas becoming a doctor can be accomplished through aceing exams, whose results no-one can dispute.

The violin and piano, of course, both require a high degree of technical mastery, and they both are dominated by classical music — that is, music one can objectively decide whether it’s being played ‘properly’ or not, as opposed to all this modern pop or rap music, which changes so quickly it’s hard to trust your own opinions.

I was never a good violinist. After more than eight years of practice, I attained Grade 8 more out of sheer grit rather than natural aptitude; I may have produced a tolerable sound, but never one that was good.

Except for when I was playing in an orchestra. You might think that the only thing worse than hearing a beginner violinist is hearing twenty beginners play, but in truth, differences in pitch (“intonation,” my teacher would cry, “intonation!”) are evened out the more players you have. The tempo would still be all over the place, but even amateur orchestras could sound mostly OK with a bit of practice.

It was also much more fun to play in an orchestra. Unlike the terrifying, solitary experience of playing alone, you could lean on your desk-mate and the people in front of you (and, as a last resort, look at the conductor) to know when you were supposed to ‘come in’ after several bars of silence. It was really quite exciting, when you weren’t bored from repeating the same section a dozen times.

In my orchestra, no matter how terrible they sounded, violinists were typically promoted into the first violins in their last year, as a reward for their long service. As it happened, I was born early in the school year, meaning the conductors didn’t realise I was in my last year until too late, so I never played in the first violins. Instead, I spent a whole year as the leader of the second violins.

I don’t know that anyone enjoys being leader of the second violins, especially in a youth orchestra. You get the occasional heroic solo, but for the most part you’re looking after your younger charges — making sure they have their music ready, showing them when we’re supposed to come in with our harmony by exaggeratedly lifting your violin a couple of bars early, that sort of thing. It’s a responsibility without much reward, but someone’s got to do it, otherwise the orchestra stops working. For me, it was an instructive experience.

I also learned the piano for several years, but that was much more fun.

Perhaps learning the violin is not meant to be fun. Lots of things in life are not fun, but they are character building.

But this is absurd! It’s possible to take a skill that require thousands of hours of practice to fully master, and make it fun. It might take a lot of effort and time and entire new fields of technology like chess computers or virtual reality, but it is possible.

And I think it’s now possible for learning the violin.

You’ve heard of Guitar Hero, right? You use a toy guitar, with five buttons on the neck:

and press the buttons and strum the ‘string’ as the coloured notes descend the TV screen:

It is plenty fun, but it’s not really like playing a guitar is it? It’s just a toy! You can’t learn how to play a real guitar with a videogame, right?

Well… what about Rocksmith? With this game, you plug in a real electric guitar — one with six strings and zero buttons — and you play along in time with the notes on the screen:

This is not a pretend guitar game. This is a real guitar game. I can attest from my experience using the Rock Band 3 Pro Guitar (also a real guitar), which I was kindly given as a review unit by Harmonix back in the day; I spent most of my time just learning chords rather than pretending to play More Than A Feeling.

I’ll be honest: it wasn’t that much fun. But it was still slightly fun, and it was much more fun than trying to learn the guitar without a videogame.

So here’s my pitch for Violin Hero. It is composed of three parts — the technology, the gameplay, and the story.

The game runs on an iPad (the bigger, the better) sitting on a music stand. The ‘controller’ is a real violin — a cheap one, costing $50 to $100 — which the iPad can hear through its microphone. And you wear wireless headphones.

Like Rocksmith, the iPad displays a visualisation of the neck of the violin showing where you should be placing your fingers and when you should be bowing. Unlike standard music notation, this will be helpful for learning good finger placement (it’s more complicated than you think).

The more accurate your pitch and rhythm, the higher score your score. You also get extra points and combo bonuses for nailing particular sections.

You rarely play alone in the game. Instead, you’re accompanied by other instruments or an entire orchestra. This improves your confidence, helps you aim your pitch, and makes you sound slightly less awful.

As you progress through the game, it becomes increasingly important that you learn how to read standard notation, to the point where you don’t get shown the ‘game’ screen any more.

You’re a rookie member of the FBI, investigating widespread corruption across multiple New York orchestras. No-one’s talking. That means there’s only one way to crack the case: from the inside.

Your mission, should you choose to accept it, is to infiltrate the orchestras, starting from the bottom and working your way right to the very top — the New York Symphony.

You begin by auditioning for an amateur orchestra in Brooklyn (in truth, they’ll take anyone they can get). But to move up the desks, you still need to practice some easy tunes and scales. As you rise in the ranks, you start collecting clues about the smaller players. Over time, you leap into bigger and better orchestras, you get invited into shadowy quartets where bad business is being done, and you embark on tours across the US and around the world.

At every step of the way, you need to prove your worth by playing ever-tougher and more impressive pieces. Luckily, you have your friends and instructors to help you.

Eventually, you make it to the New York Symphony. This is the real deal. Can you make the final steps into darkness and take on the Principal First Violin herself? Can you become… the Violin Hero?!

Yes, but: can you make any money from a Violin Hero game?

My very rough guess is that there are 1–3 million current and lapsed violinists worldwide, of whom 100–300,000 are active learners. To put that into perspective, there are more people who play Zombies, Run! than are actually learning the violin. That is not a big market.

So let’s say you charge a comparatively high $20 monthly subscription. With 10,000 subscribers, you’re grossing $2.4 million per year. That‘s pretty good, but no-one’s getting rich here. And to get even 10,000 subscribers is a big ask. How do you even find people who are learning the violin?

You could go through violin teachers, but I have a suspicion they wouldn’t like a videogame that purports to sideline them. You’d face an enormous amount of opposition from every corner. But maybe if the game was good enough, you could grow the market and create new learners, independent of violin teachers. Maybe.

In any case, it seems very difficult to make a sustainable business out of this, which is why orchestras rely on charity and government funding, rather than ticket sales, to stay afloat. That might be the best route for a game like this.

But even if Violin Hero could make money, it wouldn’t make as much money as a MOBA or a Candy Crush. In the brutal logic of investors, that means it’s not worth considering for a hemidemisemiquaver.

You can’t even use the classic Silicon Valley-apologist argument that it’d save the world. We’re talking about a better way of teaching people how to play the violin — as a venture, it doesn’t really stack up against curing all diseases or fusion energy or driverless cars.

But just because Silicon Valley demands we all become utilitarians doesn’t mean we need to live every second of our lives in that way. There is beauty in music of all kinds, including classic music. I believe classical music is one of the crowning accomplishments of civilization. It deserves some consideration, at least.

It’s not going to make you live to 200, but it’ll make your life that much more worth living. And that means it is valuable to help those who want to, to learn how to perform classical music.

“Music’s only purpose should be the glory of God and the recreation of the human spirit.” — Bach