A game I like to play at history museums is imagining the present-day equivalents of past behaviour and objects. So at The Geffrye Museum of the Home in Hoxton, London, it’s fun to look at their Period Rooms and link up past and present behaviours.

Take the 1935 Living Room; the armchairs are pointed at the fireplace (which obviously would be a TV today), and there’s a record player and radio in the corner (also TV/hifi). Or the 1695 Parlour, in which the woman of the house would spend her day noting down the household receipts on the writing cabinet (i.e. iMac) before joining her husband for dinner and listening to him read out the day’s newspaper (watching Netflix).

Then there’s the 1790 Parlour, with a set of playing cards laid out on the table. Just imagine what present day families might do when entertaining friends – why, they’d… play cards! Or maybe boardgames. Yes, it turns out that we still all want reasons to talk and gossip in an formalised way, and the things we did back 200 years ago are still pretty much exactly the same now. 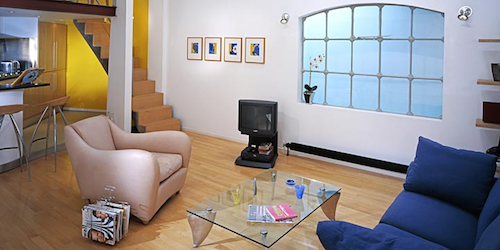 As you might expect from me, another fun thought experiment is imagining what the Period Room and gallery notes for 2014 would be; probably a room dominated by a big Samsung TV with a Playstation, some bluetooth speakers, Ikea bookshelves, a corner sofa, surround sound speakers, and a coffee table. “Here, the co-habiting couple would gather in the evening to watch ‘television serials’ and ‘YouTube cat videos’, while perusing social media on Twitter and Facebook on their tablet computers.”

The Period Room for 2034, of course, would just be an empty room with a near-invisible projector, an easy chair, and a virtual reality headset.