I am too lazy to be a good self-quantifier. And yet I persist. I have a Fitbit activity tracker that automatically syncs with the internet whenever I’m near my laptop. For a while it gave me the intense satisfaction of routinely topping the step counts of my friends, reported on Fitbit’s website, until I realised that their totals – and mine – never seemed to change much between weeks.

In the first year, occasionally my daily step count might creep over 20,000 or 30,000 steps and I would get excited about setting a new record. Sadly, that excitement has gone – having reached 45,432 steps on the day of the Edinburgh half-marathon last year, the prospect of going beyond is now confined to, well, marathons. 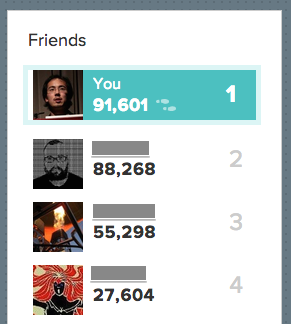 Even the flicker of pleasure I gained from the Fitbit leaderboard was extinguished by a ‘friend’ I recently added who now consistently beats me. He probably works in a job where he actually has to walk during the day, or something equally unfair. But it still provides entertainment. My girlfriend and I both enjoy walking and I’ll often ask her to guess how many steps we’ve taken so far. She’s gotten really good at this now: “Six thousand… two hundred?” “Six thousand five hundred. Only four percent off!” I’ll marvel. I can’t honestly say that the Fitbit has made me walk any more than I used to, though.

Then there’s my internet-connected Withings scales. I got these as a birthday present from my parents (stop laughing – I asked for them, you jackals!). They’re several times more expensive than my old, perfectly-accurate scales, but like the Fitbit they also automatically sync with the internet, so I don’t have to record the figures myself. At a conservative five seconds saved every day, or 30 minutes a year, in the extra time I’ve saved before I die I could watch the entire first season of Friends. Could that be any better?

While, technologically-speaking, the Withings scales do far less than the Fitbit, its ability to show me long-term trends in my weight makes it very far more useful than looking in a mirror and feeling vaguely worried/pleased.

Finally, Foursquare. Over Christmas, we visited my brother in Portland and then my girlfriend’s family in Toronto. Whenever I travel outside of London and visit normal people’s flats and houses, I am always reduced to a raving madman, rending my clothes in fury. “$350,000 for three bedrooms and two point five bathrooms? You can barely get a toilet for that price in London!”

I have a pet theory (which is wrong and offensive, but I’ll continue) that ‘professionals’ in London only stay there because they grew up in ultra-boring places elsewhere in the UK. When they eventually get to London and see the bright lights and such, they accept the horrific house prices as a necessary evil of not living in a place where nothing happens.

What they don’t realise that is that if they moved to a big city in another country, matters would be different; you could have a great house and a cool city whose inhabitants don’t all look suicidal from the recession and the Tory government.

Why don’t they realise this? Because it’s totally not obvious; when you go on holiday you don’t visit Portland or Toronto, you go to New York or Paris or Florida, places that are either just as expensive as London or don’t have the right kinds of jobs.

Anyway, after the shock and awe of Portland and Toronto’s (comparatively) low house prices, I wondered: how often do I actually go to world-class museums and galleries and theatres in London; the very things I might miss in a different city? Once a fortnight? Once a month? Once every two months? The accuracy of such data could change lives.

Because I’m an obsessive Foursquare user (although not as obsessive as someone I know who insists on checking in at ‘Heathrow Airport’, ‘Heathrow Terminal 3’, ‘Heathrow BA Check-in’, ‘Heathrow Security’, ‘Heathrow Food Court’, ‘Heathrow Gate 21’, etc.) I know exactly how many times I’ve been to the British Museum or the Science Museum in the last year. The answer is: a lot. So a move is off the books for the moment. Also my company is based in London so that’s another good reason to stay.

Steps, weight, and places visited. There’s more to life than that, and I’m tracking none of it. I’m well aware there are plenty of manual tracking solutions, from paper calendars to lovely iPhone apps. I’ve dabbled in them but I’ve never had enough staying power. I can note down how many coffees or beers I’ve had every day for a few weeks, but then I’ll get busy and forget for a week, and the whole enterprise will seem pointless.

I was appropriately excited when a genuinely new solution presented itself: Nicholas Felton’s Reporter iPhone app.

Felton is the ur-self-quantifier, the man who can legitimately claim to have been doing it before it was cool. You may know Nicholas Felton from his Feltron Annual Reports, delicately designed views into every action he took in a year, tracking everything from his encounters with his average number of encounters with friends per day (4.8 in 2009) to the number of plants he’s killed (four in 2006). One of the first projects we worked on at Six to Start involved him; we commissioned Felton to create an ‘infographic’ story with Matt Mason about online piracy. It was a nice idea but it didn’t have the impact we’d hoped for; not their fault, it was a bit rushed. The rest of the site is well worth a look though.

Anyway, Reporter is different. Rather than expecting you to dutifully note down every action you take without fail, Reporter pings you a few times a day asking, “Are you working?”, “Who are you with?”, “What are you doing right now?”, and so on; when you go to bed it asks you about how your day was, and when you wake up it asks you how you slept. It then summarises this data through bar charts, ranked lists, and graphs. In other words, it sacrifices perfection in favour of random sampling. The former is theoretically better, but in practice inattainable – at least with current technology.

I bought Reporter as soon as it came out, and sadly I have found it to be unsatisfying. Part of that is down to bugs and usability issues, which I assume will be fixed in the coming weeks and months (e.g. I can’t delete mistyped locations; I frequently forget to switch between being awake and asleep which effectively breaks the reporting). There’s one issue, however, that I think will be harder to fix: Reporter feels annoying. Most of the time it’ll ping me and I’ll note that, yep, I’m still browsing the web; but sometimes I’m in a meeting or I’m concentrating, and I’ll just ignore it. Reminder after reminder will pile up, and I’ll feel guilty at not spending the mere 20 seconds of answering questions.

I know, I’m not meant to feel guilt because it’s random sampling, right? It doesn’t matter if I miss a few pings.

Except it does. The more I ignore Reporter, the less representative and accurate it gets. If I never answer questions during meetings or while I’m writing, then the resulting data and lists show that I’m never in meetings or writing – which is plainly untrue, and therefore useless. I can think of various workarounds and patches (“What were you doing at 4:27pm?” or syncing with your calendar) but none are satisfying. So I’m stumped, sorry.

I don’t like criticising Reporter. I admire the thought that went into it, and when it was originally announced I loved the idea. Maybe I’m just the wrong type of user; maybe other people don’t find it annoying and they have no problem answering the app’s pings regularly. But I’m not so sure. I don’t think that notifications are the right way to go. I think we’re lazy. (Things I need to investigate/discuss further: Journaling apps like Day One, activity tracker apps like Moves)