When I heard about Reamde‘s premise of hackers, spies, and gold mining in a massive multiplayer online game called T’Rain, I had the same worried feeling that I had when I heard about Anathem’s monasteries – that Neal Stephenson was venturing away from the sort of adventure/SF capers I enjoyed best. However, I was pleasantly surprised at Anathem and I held out the same hope for Reamde. 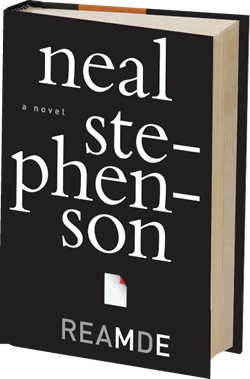 The problem with Reamde is not that it’s trying to be more ‘accessible’, if by ‘accessible’ we mean it’s set during the present day and has no obviously futuristic elements that might put the ‘mainstream’ off. No, it’s problem is that it’s frequently boring and it doesn’t add up to much at all.

Sure, there are flashes of the classic Stephenson brilliance – the insightful observations of how technology is changing the world, the clever ideas about business and gaming, the tangents into the finer points of grammar and MMO economies. But these are buried in literally thousands of words describing stuff that I frankly couldn’t give a shit about. Every fight, every journey, every thought is explained in excruciating detail, often from multiple points of view, and a lot of the time, none of it is particularly relevant to the plot.

Even worse, the usual and excusable Stephenson vices seem to be on particular show in Reamde: the tendency of almost all the smart characters to speak in the same over-specific way, the cliched over-weaponed and sprawling family of hard-bitten survivalists, the revisiting of Manila and Trinity College in Cambridge, the baffling hookups. I accept these things as being integral to Stephenson’s soul and writing, just as Iain M Banks frequently lapses into forced-jokiness and gratuitously violent torture scenes in his novels, but usually there are more than enough good moments to balance them out. But not this time.

It’s upsetting because there are some fantastic moments in the book where Stephenson was clearly having a lot of fun. I was impressed by the man-hunt in Xiamen, and later on, a massive battle in T’Rain occurred simultaneously with real world shenanigans. Many reviews (such as the WSJ’s*) suggest that these moments, and others like them, are the meat of the book; in fact, they’re far outweighed by tiresome detailing of gun battles and people travelling from A to B. Perhaps if it was a mere 500 pages instead of 1000, I’d have enjoyed it more. Unfortunately, as it stands, I can’t see myself recommending this book to anyone.

Stephenson is still clearly capable of writing awesomely interesting and entertaining fiction. The question is, what happened with Reamde? I can see three possibilities:

1) It really is fantastic and I just have poor taste; certainly most newspaper reviewers seem to like Reamde. However, Amazon.com’s reviews are decidedly mixed, and many Stephenson fans seem disappointed.

2) Stephenson really believes Reamde is a good book. It’s possible. But in contrast to his latest few novels – Anathem, The Baroque Trilogy, Cryptonomicon, etc – I cannot detect any deep philosophical message or personal interest behind Reamde other than ‘hey, isn’t it weird what might happen when lots of people use the internet for games?’ It doesn’t strike me that this was a novel he was dying to write. Which leaves…

3) Stephenson needs the cash and has written an ‘accessible’ novel to turn open the money spigot (which, I realise, is basically what the two writer-characters in Reamde are essentially doing). He knows it’s not his best work, but what the hell, it’s not terrible either.

But why would he need the cash now? Obviously I have no insight into his financial situation. However, Stephenson must be spending an awful lot of time on The Mongoliad these days; writing an online serialised story with updates every month is a proper job, as I can attest to, and you need a lot of paying subscribers to make it work.

I subscribed to the Mongoliad, sight unseen, just as I buy all of Stephenson’s books. I recall it costing a very reasonable $10 for a year’s subscription, and I rubbed my hands in anticipation of the good stuff that was sure to come. Yet after a year’s worth of updates and god knows how many thousands of words published, I haven’t even been able to finish the first chapter.

There are a few reasons why. The first is that the opening didn’t grab me – it seemed rather slow. But probably a bigger reason is that the website and iPad app are so awfully designed that I couldn’t bring myself to read any further. Every time I look at it I feel like I’ve been teleported back to 1995 years. Worse, the iPad app – where I would theoretically do most of my reading – steadfastly refused to remember what I’d read or download new content automatically.

If all of this sounds petty, a friend who has been reading the story confessed that he only managed it by copy-and-pasting the text every week into Microsoft Word and printing it out from there, purely to avoid the terrible design.

As we well know, Stephenson is not one who cares overmuch about appearances, and one might argue the same applies here: why get upset about how the site/app looks as long as the story is good? The problem is that it’s not just that the site and app look terrible, it’s that they don’t even work very well, either. They’re barely intuitive and a lot of the things I’ve tried to do (like log in via Twitter, view some wiki pages) are plain broken. It looks and works like shit.

It could be that the story is great and I’m just totally shallow, but I happen to think that these things matter, and I find it truly sad that my friend felt forced to use Microsoft Word, of all things, to read the story. Just look at what you’ve reduced us to, Stephenson!

All of these failings might be excusable if it really was 1995 and the site had just launched, but it’s not. There is nothing – graphics, design, interaction, UX – that a developer and designer couldn’t fix in a month, tops. Instead, we’ve been saddled with this monstrosity for an entire year, all while the folks at Subutai (the guys behind The Mongoliad) are talking about making an online game and film and whatever.

Maybe that’s where all their energy is going, into this extra transmedia stuff. But if their lack of care towards the written story is indicative of what to expect on other platforms, disappointment is too gentle a word for me to use.

Stephenson is the very last author I would want to criticise in this way. I can’t praise The Diamond Age, Cryptonomicon, and Anathem highly enough. I just hope he gets it together.

5 Replies to “On Reamde, Neal Stephenson, and The Mongoliad”