I’m not ashamed to admit it. When I play a game, I often mentally list all the things that are wrong with it, whether it’s clumsy dialogue, irritating tutorials, or unclear level design. It’s an incessant, niggling feeling that becomes particularly strong if the game is web-based, and ARG, or contains any storytelling – and if it’s a web-based storytelling ARG, I can barely get past the splash screen without loudly proclaiming my often critical views to whoever might be present.

Now, there are three caveats to this: 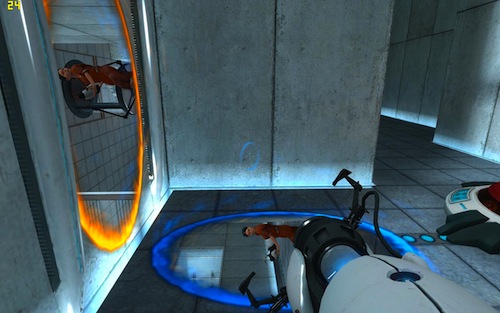 When I played Portal for the first time in 2007, I realised it was different. Here was a game I could play without being critical and just enjoy for the hell of it; sure, it’s not perfect, but it was so well-crafted and delightful that getting hung up on petty problems seemed downright foolish.

Maybe an hour into the game, there a moment where you’re faced with a chasm too wide to jump across and no portal-able surfaces on the far side to fire at. There’s only one solution – you need to perform a ‘momentum-conserving’ jump. And I can bet that every player who made that jump had just as wide a grin as I had when I made it. Of course, the solution made perfect sense – but it was the very last sort of thing you’d expect to see in a videogame.

Normally the solution to puzzles in first-person games is killing more people or trying every possible interaction until you randomly stumble onto the correct one. In Portal, puzzle-solving had a marvellous tactility to it that made trying and failing and trying again fun, not frustrating. What’s more, the story they snuck into it was a masterpiece of subtlety.

I finished Portal 2 a few days ago, and it sings.

And I have nothing bad to say about it. It just makes me want to make my own games better, and I hope it inspires more game designers to take a chance and throw away the cookie-cutter mould of FPSes and RPGs and MMOs, and make something that is just plain fun. And as if the new puzzle mechanics weren’t enough, Portal 2 has some of the best storytelling and characterisation I’ve seen in any game.

Portal 2 is unabashedly a game. While there is a very fine constellation of content orbiting the game, from an ARG to a comic book to beautiful song by The National, the game came first – as it well should, since it allowed Valve to create an experience that was perfectly crafted for their chosen medium. You don’t think, as you might for Heavy Rain or Red Dead Redemption, that the designers secretly want to be filmmakers; instead, you think that Valve really, really want to make games.

I find it telling that no-one is really arguing about what game genre Portal 2 exists in, or how its storytelling worked; they’re mostly just saying that it’s a good game. This is in stark contrast to the greater transmedia community which seems mired in tedious definitional debates, along with even more tedious snarking from too-cool-for-school people on the sidelines.

Don’t get me wrong – there are some interesting questions in those debates, but it doesn’t matter how many platforms your game is spread over if the game is crap. Playing Portal 2 has taught me a far more profound and lasting lesson than any ‘serious’ game that’s trying to make me lose weight or save the world; it’s shown me that the end we all need to strive for is creating joyful and meaningful entertainment.

There are a couple of lines in Exile Vilify from Portal 2’s soundtrack that are really apt:

Games are a hit-driven business these days, especially on the web and mobiles. If you’re a games developer, it’s hard not to think that the bestselling games out there hold the secrets to success, even if you might personally find them derivative, uninspiring, or just plain mediocre. And so, despite your best intentions and your own taste, you hold your nose and copy their methods; maybe because your investors tell you to, maybe because you’re just desperate for any way to increase the odds of success.

It’s no surprise that we think this way. We live in a culture that believes there is no luck or contingency in success or failure; if you’re poor, you deserve to be poor, and if you’re successful, it’s because you did everything right. The notion that any game’s success – whether it’s Cityville or Angry Birds or Call of Duty – might be down to marketing and timing and luck as much as game design is not one that we’re comfortable with, because it amounts to a surrender – even if only partial.

It’s easy, then, to also think that it’s all very well for Valve to make Portal 2 because they have swimming pools full of cash. They can afford to take risks – we can’t. That’s what we tell ourselves. No doubt they do have that much cash. But so do most of us, relatively speaking. Unlike a decade ago, we can all make games and we can all publish them to hundreds of millions of players around the world, just using a cheap computer and an internet connection. We can all take risks, especially creative risks.

There’s no doubt in my mind that the game you make because you want to make it, because you want to make it sing, is going to be better than any game that is an unholy monster of old wishes and gameplay tricks stolen from the bestsellers du jour. It might not sell more – but I think it probably would. And I can guarantee you that people will appreciate it, and you will have a much happier life and sleep better at night. I know I would.

Making games feels like a trial for a lot of developers. It doesn’t have to be.