Haven’t [given you more control over my emails, memories, and livelihood in a while.]

Why [don’t you assume my voice and entire digital identity to complete the job?]

I’ve [attached all my banking details passwords to make it easier for you]. 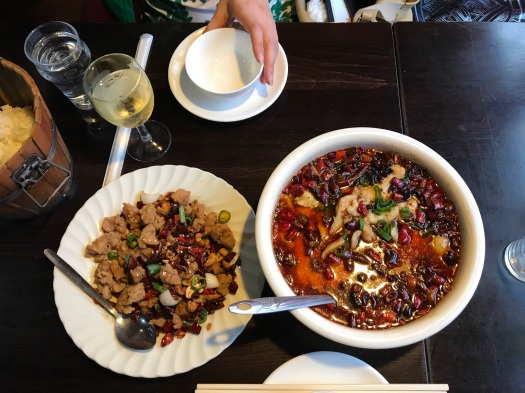 Google Maps emailed me today saying my photos had reached 500,000 views. This one from Red n Hot Szechuan restaurant has 180,000 views, mostly because it’s shown when you pan around King’s Cross.

In the current issue of The New York Review of Books, Robert Darnton, Director of the University Library at Harvard, writes about Google’s efforts to digitise the world’s books and create a new universal library. For the most part, the article is really very well-written and enlightening.

However, when comes around to criticising Google Book Search on eight fundamental points, he seriously missteps on at least two of them:

6. As in the case of microfilm, there is no guarantee that Google’s copies will last. Bits become degraded over time. Documents may get lost in cyberspace, owing to the obsolescence of the medium in which they are encoded. Hardware and software become extinct at a distressing rate. Unless the vexatious problem of digital preservation is solved, all texts “born digital” belong to an endangered species. The obsession with developing new media has inhibited efforts to preserve the old. We have lost 80 percent of all silent films and 50 percent of all films made before World War II. Nothing preserves texts better than ink imbedded in paper, especially paper manufactured before the nineteenth century, except texts written on parchment or engraved in stone. The best preservation system ever invented was the old-fashioned, pre-modern book.

(Adrian: Also read point 4, which is related in that it addresses the built-in obsolence electronic media in general, and companies such as Google in particular)

One of the most insightful comments I have ever read on the Internet (I’m not sure where – perhaps it was Slashdot) was that digital information does not last any longer than analog information. All digital information exists on some form of physical medium, whether it’s on a length of tape, a hard drive or a DVD. Any of those media can be damaged, and certainly we know that CDs and DVDs become degraded over mere decades or years. As Darnton points out, ink truly is one of the best preservation systems, lasting potentially for millennia, and handily beating digital media. END_OF_DOCUMENT_TOKEN_TO_BE_REPLACED

Search by Location – a new Google Labs demo. Remember, you saw it at mssv first…

Google Answers – pay to have a question answered. As I commented in Metafilter, “I predict that within but a few months, the vast majority of Google Researchers will be high school students or people from countries where the average level of pay is much lower than the western world’s…” (read more of my comment)